"It's your Private Show. Take a bow."

Fantasy In Bloom
Private Show is a fragrance created by Britney Spears, and was released exclusively at Kohls on July 25, 2016, and worldwide the following month.

It is an "uplifting, sexy scent" according to Spears.

"The new fragrance is really beautiful" says Spears. "I was inspired by Hawaii and by soft, soothing smells that has a pinch of lavender".

Spears's mother reportedly loves the fragrance and a lot of her 'girl friends' do to.

Spears officially unveiled the fragrance on June 17 through Twitter, "I'm so excited to introduce you all to my new fragrance, Private Show". [1]

The composition is floral - fruity – gourmand, expected to be more mature that of the Fantasy line.

It opens with sweet and fresh notes of clementine, nectarine and coffee with whipped cream.

The warm dry down consists of luminous amber and sensual musk.

The fragrance is available in a diamond-shaped bottle and Eau de Parfum concentration.

In 2016, Britney invited a girl into the studio to work on something 'totally different' and have a really cool song for the fragrance, and they titled it "Private Show". The fragrance and song went hand-in-hand, with the song being a "thank-you-gift" for pre-ordering Spears' ninth studio album Glory. 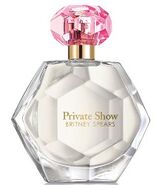 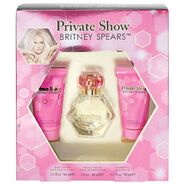 Retrieved from "https://britneyspears.fandom.com/wiki/Private_Show_(fragrance)?oldid=30772"
Community content is available under CC-BY-SA unless otherwise noted.