"Pretty Girls" (2015) is a song by Britney Spears. It was intended to be included on her upcoming ninth studio album, it was scrapped from the album. The song is a collaboration with award-winning rapper Iggy Azalea.[1] It was released on May 5, 2015. The song was co-written by British girlband, and winners of The X Factor UK, Little Mix.[2] It peaked at 26 on the Billboard Hot 100.

According to Azalea, the song was originally written for Spears, however was handed to Azalea for her second studio album after delays with Spears' own album. However, the song was handed back to Spears as the album got back on track.[3]

The song features verses from both Spears and Azalea, with both artists featuring on the chorus. In an interview with MTV, Azalea stated that the chorus goes "back and forth" between herself and Spears, and described the song as a "powerhouse".[3] 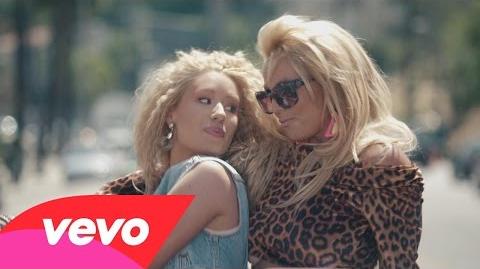