"Me Against the Music" is a song by American recording artist Britney Spears from her fourth album, In the Zone, featuring American recording artist Madonna. It was released on October 20, 2003 as the lead single from the album by Jive Records. After bonding with Spears during a night in New York City, Christopher Stewart and Penelope Magnet started working on the song for her. During rehearsals for the 2003 MTV Video Music Awards, Spears played Madonna the track and asked her to do the song with her. "Me Against the Music" contains influences of hip hop and usage of funk guitars. Spears and Madonna trade lines during the verses, and Madonna sings the bridge. Lyrically, the song talks about battling the music and the pleasures of letting go on the dancefloor.

"Me Against the Music" received mixed reviews from critics. Some felt it was a strong dance track of In the Zone, while others referred to it as lackluster and disappointing. The song was a commercial success, peaking atop of the charts in countries such as Australia, Denmark, Hungary, Ireland and Spain, as well as the European Hot 100 Singles. It also peaked at number two in Canada, Italy, Norway and the United Kingdom, and inside the top five in many other nations. The song won the "Hot Dance Single of the Year" accolade at the 2004 Billboard Music Awards.

The accompanying music video shows Spears and Madonna playing opposites in a nightclub. A cat-and-mouse chase ensues, and Spears finds Madonna in the end, only for the latter to disappear before they kiss. The video received positive reviews from critics, who noted it as symbolic of the sexual roles between the women.

Spears has performed the song in a number of live appearances including the 2003 NFL Kickoff Live, Saturday Night Live, 2003 American Music Awards and TRL. She has also performed remixed versions with elements of bhangra music at The Onyx Hotel Tour (2004) and The Circus Starring Britney Spears (2009). "Me Against the Music" has been sampled by Justice, while the music video was recreated by television series Glee and included an appearance by Spears. 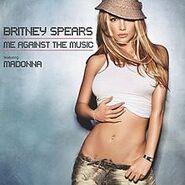 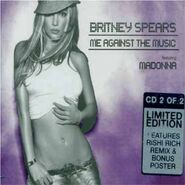 Me Against the Music - Part 2 The Limited Edition 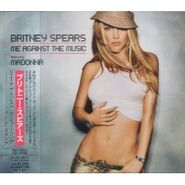 The Japanese Cover of "Me Against the Music"
Add a photo to this gallery
Retrieved from "https://britneyspears.fandom.com/wiki/Me_Against_the_Music?oldid=34708"
Community content is available under CC-BY-SA unless otherwise noted.