View source
watch 01:36
We're Getting Mutants in the MCU - The Loop
Do you like this video?
Play Sound

Be the brightest star in the universe

Fantasy Twist
Cosmic Radiance is a fragrance by Britney Spears and Elizabeth Arden. It was released in August 2011.

It is a spin-off perfume of Radiance.

On July 15, 2011, it was announced that Spears would re-issue "Radiance" into a new fragrance titled "Cosmic Radiance."

She revealed that "I believe that all women can create their own world where they shine the brightest. [...] It’s all about having the power and confidence to be yourself. When I wear my new scent, Cosmic Radiance, I feel beautiful, empowered and sexy."

Along with the announcement, a marketing poster featuring the singer that shows the perfume bottle as being decorated with black and white jewels was also released.

The tagline of the fragrance is "Be the brightest star in the universe."

According to Fragantica, the composition of "Cosmic Radiance" opens with "strong and optimistic citruses, and a refreshing glittery red bouquet opening its fragrant petals in the very heart of the composition. Base notes twinkle and warm with notes of amber, soft vanilla and creamy sandalwood."

It was also revealed that "the fragrance can be expected with launch of new remix album" by Britney in August 2011.

"Cosmic Radiance" was created by Honorine Blanc and Harry Fremont. The remix album "B In The Mix: The Remixes Vol. 2" was released in October 2011. 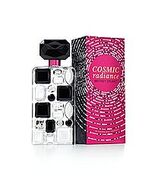 The Beauty Set of Cosmic Radiance

The Poster of Cosmic Radiance
Community content is available under CC-BY-SA unless otherwise noted.
Advertisement